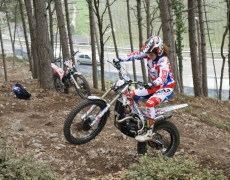 German Theresa Bäuml (Beta) topped the first podium respectively in Women class in Pietramurata, Italy, first round of the 2016 FIM Europe Trial Championship.
Seventy young riders are taking part to this first event of a real “evergreen” series: a championship that does not know the “crisis” word.
On the 12 sections in the private area, easily reachable by spectators, the girls started first on a cloudy spring day. The last year’s champion, Bäuml, showed soon her intention to defend the title. She lost just 7 points in the whole first loop, while all her rivals’ scores were quite distant. Last year’s winner in this round and home idol Sara Trentini (Beta) scored 19 penalties, same for German Bianca Huber (Scorpa) and these ones were the same girls who occupied the three steps of the podium one year ago, but other two ones were very close. With one point more, Norwegian Mette Fidge (Sherco) and with 21 points German Jule Steinert (Beta).
In the second lap Theresa managed to maintain her lead and even if she made 10 mistakes she won with a secure gap. Sara improved her score (17) gaining the runner-up position ahead of Mette, who was able to overtake Bianca.